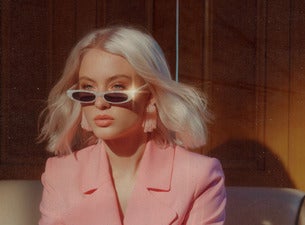 Zara Larsson is the new world pop princess. When she was only 10 years old, Larsson won the Swedish talent show “Talang Sverige” and the first EPs “Introducing” and “Allow Me to Reintroduce Myself” came out in 2013.

The Swedish singer-songwriter became more and more popular with the debut single “Lush Life”, the second most streamed song by a female artist on Spotify after Adele's “Hello.”

In 2016, Zara Larsson collaborated with DJ David Guetta on the song “This One's for You”, the 2016 European Football Championship anthem.

“So Good” is Zara Larsson's international debut album and contains the singles “Lush Life”, “Never Forget You”, “Ain't My Fault”, “I Would Like”, “So Good”, “Symphony” in collaboration with Clean Bandit, “Don't Let Me Be Yours” and “Only You.”

Zara Larsson's featuring also appears on the Fedez track “Holding Out For You”, released on January, 11 2019.