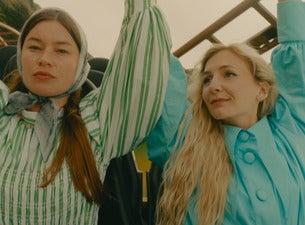 Wet Leg, the power duo from England, will arrive in Italy for their first performance on October 25 2022 at Magazzini Generali in Milan!

The English indie rock duo Wet Leg was formed by the musicians Rhian Teasdale e Hester Chambers from the Isle of Wight in 2019.

The Wet Leg achieved the fame in 2021 with their debut song Chaise Longue. The song has become a hit with more than 12 million streams on Spotify besides being acclaimed by the audience and the critics.

Chaise Longue was followed by the songs Wet Dream, Oh No and Too Late Now (chosen as Hottest Record by BBC Radio 1). The band was also nominated for the Artists to Watch 2022 by Vevo DSCVR.

In April 2022 Wet Leg will release their self-titled debut album, preceded by the song Angelica.

You can’t miss the Italian show of the new revelation of indie made in UK, buy immediately the official tickets for Wet Leg!