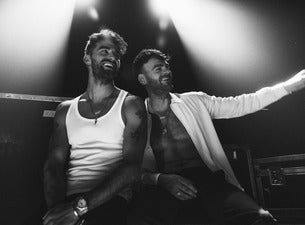 The Chainsmokers concert originally scheduled for October 10 2020 at Mediolanum Forum in Assago, Milan and rescheduled for May 5 2022 at Lorenzini District in Milan and for November 11 2022 has been shifted to Fieramilano in Rho (Milan). If you already bought tickets, those will be valid for the new rescheduled date at Lorenzini District. For further information, please READ HERE


The Chainsmokers, the historical duo of electronic music, will be back for an unmissable show on November 11 2022 at Fieramilano in Rho (Milan).

The duo, which consists of Alex Pall and Andrew Taggart, debuted in 2014 with the song Selfie and achieved fame with Closer, featuring Halsey, and Don’t Let Me Know included in the EP Collage of 2016. Collage, which ranked in the Top 10 of the Billboard Chart in the week of release, includes the songs Setting Fires, Inside Out and All We Know.

The lucky song Closer of The Chainsmokers in collaboration with Halsey remained on the top of the Billboard Hot 100 for twelve weeks (besides 1,6 billion streams on Spotify and 2,4 billion views on YouTube).

In 2017 the duo put out the album Memories… Do Not Open including the songs Paris, Something Just Like This featuring Coldplay and The One.

The latest work of the band is the album World War Joy of 2019 including the hits Why Do You Love Me featuring 5 Seconds of Summer, Call You Mine with Bebe Rexha and Takeaway in collaboration with ILLENUIUM and Lennon Stella.

You can’t miss the iconic duo of the records, buy immediately the tickets for The Chainsmokers!