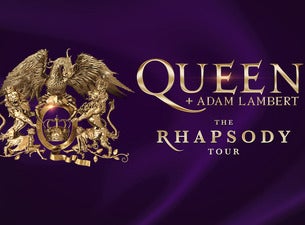 The Rhapsody Tour is the first European tour since the release of the record-breaking movie Bohemian Rhapsody starring Rami Malek, who won the Oscar for Best Actor for his performance as Freddie Mercury. Bohemian Rhapsody is the highest grossing musical biopic ever.

Since Adam Lambert first shared the stage with Queen on the final episode of American Idol in 2009, his dynamic performance has invigorated the band and thrilled fans all over the world. Since their first real show together in June 2012, May and Taylor's amazing performances and Lambert's vocal skills and stage presence have created an explosive combination.

Queen are masters of extravagant performances and sumptuous visuals. Rhapsody's new production is the work of set designer Ric Lipson and light designer Rob Sinclair of Stufish Entertainment Architects, who worked with the band on the latest and stunning News Of The World tour.

What are you waiting for? The Show Must Go On!


In compliance with the medical emergency set to prevent COVID-19 from spreading, the only Italian concert of Queen + Adam Lambert originally scheduled on May, 24 2020 at Unipol Arena in Casalecchio di Reno, Bologna, and then moved to May 23 2021 has been rescheduled for July 11 2022 at the same venue. If you already bought tickets, those will be valid for the new date. For further information, please READ HERE