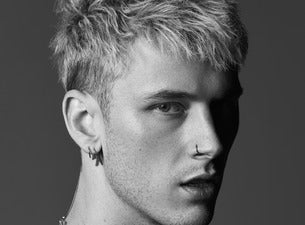 In compliance with the medical emergency set to prevent COVID-19 from spreading, the Machine Gun Kelly concert scheduled on July, 1 2020 at Sequoie Music Park in Bologna has been cancelled. For further information, please READ HERE


Machine Gun Kelly, pseudonym of Richard Colson Baker, is a rapper and actor from Cleveland that debuted in 2012 with the album “Lace Up”, thanks to which he won “Best US Act” at the MTV European Music Awards 2012. “Lace Up” contains the tracks “Wild Boy”, “Invincible” and “Stereo”, while the following album “General Admission” (2015) was preceded by the singles “Till I Die” and “A Little More”.

After “Binge” (2018) and “Hotel Diablo” (2019), the Cleveland rapper dropped his latest single “Why Are You Here”, the first taste off his upcoming album “Tickets To My Downfall.”

Machine Gun Kelly debuted as an actor in the movie “Beyond the Lights - Find Your Voice” and played Tommy Lee in the film “The Dirt.”