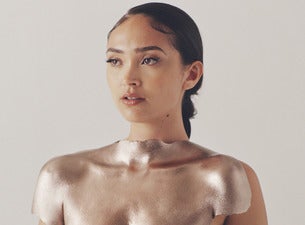 Due to the restrictions imposed to contain the Covid-19 virus, the show of Joy Crookes previously scheduled for February 27 2022 at Circolo Magnolia in Segrate (Milan) has been cancelled. For further information, please READ HERE


Joy Crookes, defined as the rising star of the British music scene, has Bengalese and Irish origins but grew up in London listening to an eclectic mix of music. Joy debuted at the age of 17 with the song New Manhattan in 2016, included in the EP Influence of 2017.

Besides New Manhattan, Influence included the songs Power, Bad Feeling and the hit Mother May I Sleep With Danger? with more than 15 million streams on Spotify. Influence was followed by the EPs Reminiscence and Perception with which Joy Crookes reached the top of the UK Asian Chart and was nominated for the Rising Star Awards at Brit Awards.

In 2021 Joy put out Skin, her debut album, which was anticipated by the song Feet Don’t Fail Me Now with three UK Music Video Awards won. The album ranked in the Album Top 10 in UK and Scotland and in the Irish Top 30 thanks to songs like Trouble and When You Were Mine.