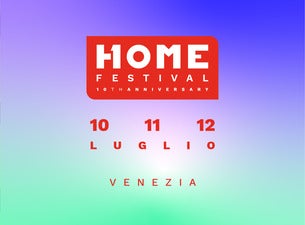 For its tenth edition, Home Festival is returning to an exceptional location. The festival is taking place from July 10 to 12 at Parco San Giuliano in Mestre, Venice.

For the first time ever, the world’s biggest rock band is headlining Home Festival on July, 12 at Parco San Giuliano in Venice and is delivering one of the hottest performances of Italian summer 2020. Founded in 2014 and made of 1,000 musicians without discrimination of age, place of origin, education and genre, ROCKIN’1000 became popular on the Internet due to a Foo Fighters tribute. Thanks this viral video, the group is now playing all over the world.

Home Venice Festival is a festival dedicated to all – a unique combination of past, present and future in the setting of one of the most beloved cities in the world, Venice.

In its previous edition Home Venice Festival 2019, one of the most acclaimed rock bands in the world, Editors, the rock blues band Rival Sons, the reggae beatmaker Alborosie and the Milanese indie pop band Canova played on the opening day.

On Saturday July, 13 2019 the techno icon Paul Kalkbrenner and the American singer-songwriter LP dominated the scene. One of the new hip hop generation rappers Noyz Narcos and the Roman songwriter Gazzelle also sang on the same festival day.

Don’t miss the festival dedicated to the international music scene!