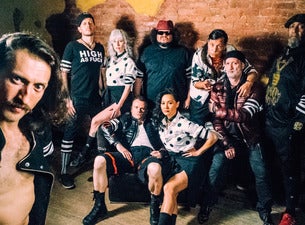 5 Events
Loaded 7 out of 7 events
Back to Top

The gypsy punk band Gogol Bordello will be back in Italy for two unmissable shows:

After two years as a wedding and entertainment band Gogol Bordello reached success in 2005 when Start Wearing Purple, one of their most famous song, was included in the soundtrack of the movie Everything Is Illuminated of Liev Shreiber where Eugene was a main actor. Thanks to this song Gogol Bordello signed a record deal. That same year the band left for a tournée in the USA and in Europe where they performed at the most important festivals.

The album Super Taranta! was released in 2007 and it included the songs Wonderlast King, Alcohol and American Wedding. After the release of the album the band went on tour with Madonna as opening band of her Sticky and Sweet Tour.

The sound of Gogol Bordello is known worldwide, they combine gypsy rhythms to hip hop, punk and reggae influenced by artists such as Fugazi, Stooges, Jimi Hendrix, and Manu Chao.

Throughout this 15 years of career, Gogol Bordello performed at hundreds of concerts and tours all over the world, also collaborating with important artists. The credit goes to the frontman and actor Eugene Hutz with his charisma, physicality, and ability to tell stories.

You can’t miss the chance to dance with Gogol Bordello, buy the official tickets!