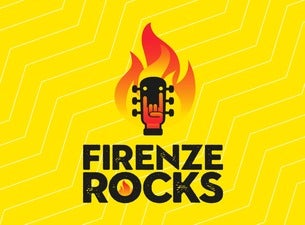 9 Events
Loaded 9 out of 9 events
Back to Top

In compliance with the medical emergency set to prevent COVID-19 from spreading, the Firenze Rocks festival events scheduled from June, 10 to June, 13 2020 at Visarno Arena in Florence have been cancelled. If you already bought tickets for the 2020 edition, those will be valid for the 2021 edition. For further information, please READ HERE


Firenze Rocks, the rockest Italian summer festival, returns for a fourth edition full of surprises for all rock music lovers out there.

Among the most important and prestigious Italian festivals in Europe, Firenze Rocks 2019 took place from 13 to 16 June at the magnificent Visarno Arena, in Florence.

The Smashing Pumpkins, the alternative-rock pioneers that became famous thanks to "Siamese Dream" and "Mellon Collie and the Infinite Sadness!", played their new album "Shiny And Oh So Bright, VOL. 1 / LP: No Past. No Future. No Sun”. The latter brought the founding members Billy Corgan, James Iha and Jimmy Chamberlin back together.

Ed Sheeran, the British pop star and author of the hits "Perfect" and "Shape of You", was Firenze Rocks 2019 headliner on Friday 14 June. Matt Simons, Zara Larsson and Snow Patrol took the stage before Ed Sheeran at the Visarno Arena.

On Saturday 15 June, Eddie Vedder came back to Firenze Rocks to perform as a solo act after his legendary festival performance in 2017. In fact, with over 45,000 tickets sold, Eddie Vedder broke the record for the highest number of paying spectators in his entire solo career at Florence Rocks in 2017. On June 15, The Struts, Nothing But Thieves and Glen Hansard also played at the festival.