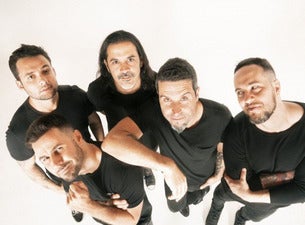 Founded in 2014 by members of several Brazilian bands such as Udora, Sepultura, Reação em Cadeia and Sayowa, the quintet is characterised by a mix of heavy music, pop ambition, South American sound and instrumental fluidity. The band's name is a shorter version of the saying Too Much Ego Will Kill Your Talent and they have been known to change musical instruments during performances.

With their debut single Sublimated they gained attention from local radio stations and were included in the Lollapalooza Brazil line-up.

Their second album, The Dance Between Extremes, was recorded at Dave Grohl's Studio 606 and they were chosen as the opening act for Foo Fighters concerts.

Ego Kill Talent have also been support bands for System of a Down and Korn, as well as performing at festivals such as Rock in Rio and Download Festival.

In 2017 their first album was released, which had the same name as the band. Over the years they have also released several EPs including Sublimated, Still Here, My Own Deceiver, Live in Europe 2017.