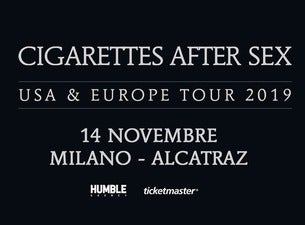 7 Events
Loaded 7 out of 7 events
Back to Top

About Cigarettes After Sex

After winning the affection of both critics and fans thanks to the blurred and ethereal atmosphere of their songs, Cigarettes After Sex released their homonymous LP in 2017. On their tracks, Greg Gonzales’s sensual and androgynous voice perfectly matches with the slowed-down guitar sounds, creating a hypnotic emotional tide.

The frontman Greg Gonzalez has hyped fans on social media by announcing the Brooklyn-born band is releasing their second studio album “Cry” on October, 25 2019. The lead single is “Heavenly” is already out on all streaming platforms.

Cigarettes After Sex sold over 550,000 copies, reached 360 million streams on Spotify and 350 views on YouTube, proving the band’s global success. Cigarettes After Sex are an actual “overnight Internet Sensation (…) that captures the darker side of pop”, according to Vice US.

Let yourself be carried away by Cigarettes After Sex’s intimate and romantic music trip!