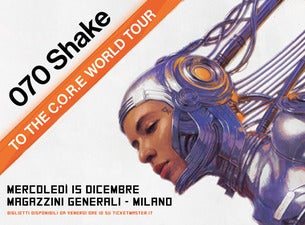 070SHAKE arrives in Italy for her only stop of the To The C.O.R.E World Tour at Magazzini Generali in Milan on December 15 2021.

070SHAKE, the stage name of Danielle Balbuena, is one of the next big thing of the American hip hop scene. Danielle was born in 1997 in New Jersey and, just like the other girls of her age, began to write and record songs and upload them on Sound Cloud. Unlike many young sonwriters, 070SHAKE talks about the discrimination of trans, homosexuals and minorities. In 2016, Danielle was noticed by Kanye West’s label G.O.O.D. Music which released 070SHAKE’s first song Trust Nobody. The track is now a symbol of pride and emancipation for the LGBT community.

070SHAKE has also collaborated with Pusha T for the song Daytona, with Kanye West for Ghost Town and with the band Tame Impala for the remix of Guilty Conscience.

In 2020, 070SHAKE released her first record Modus Vivendi where she expresses her essence with strong lyrics and a variety of harmonies, from soul to trap and indie.

You can’t miss the only show of 070SHAKE in Italy!